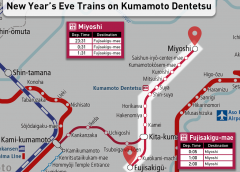 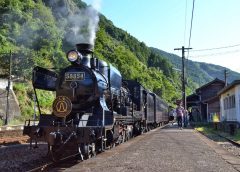 JR Kyushu has decided to operate the popular special train “SL Kimetsu no Yaiba”for 5 days in December 2020, that have been operated in November. 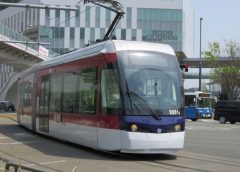 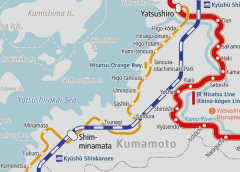 Hisatsu Orange Railway resumed train operation on Sunday, November 1, 2020 between Yatsushiro Station (Kumamoto) and Sashiki Station (Kumamoto), which had been disrupted due to the effects of the heavy rain in July 2020. This line suffered a lot of damage such as sediment inflow due to the heavy rain disaster, and although some sections has been disrupted, the operation of the all line was restarted for the first time in about 4 months. They are operating on regular timetables, including not only local trains but also the sightseeing train “Orange Shokudo” where you can enjoy various meals on board. 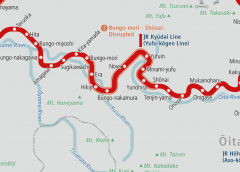 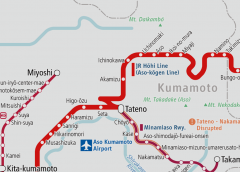 JR Hōhi Line (豊肥本線) was resumed train operation on Saturday, August 8, 2020 between Higo-ōzu Station (肥後大津, Kumamoto) and Aso Station (阿蘇, Kumamoto), which has been disrupted due to the disaster of the 2016 Kumamoto Earthquake. As a result, Hōhi Line resumed operation on all lines between Kumamoto and Ōita for the first time in about 4 years and 4 months from April 2016. 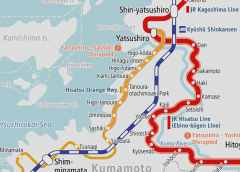 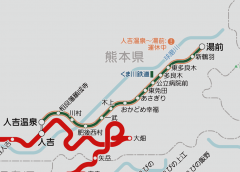 Kumakawa Railroad (くま川鉄道) is disrupting operations on all lines between Hitoyoshionsen Station (人吉温泉, Kumamoto) and Yunomae Station (湯前, Kumamoto) for the time being due to the effects ofthe heavy rain disaster in July, 2020. They are carrying out the substitute bus service between Hitoyoshionsen Station and Yunomae Station from Monday, July 20, 2020 (only weekdays).